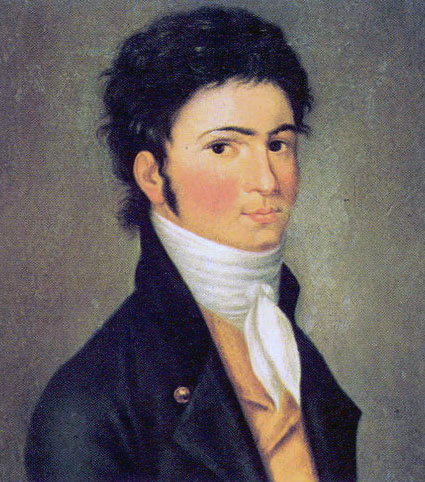 Timewarp to 1802 – a comtemporary’s view

Be prepared to travel on new emotional paths

Beethoven also titled this sibling of 1801 „almost a fantasy“. The more than unusual first movement not only does away with a stringent notion of  a fantasia, the piece dismantles more – not only that it flouts the familiar fast-slow-fast structure.

Structurally, a surprise comes already in the first movement. Not only does it not give the piece its character early (that is delayed until the end), not only is it not a fast and lively movement (it is an Adagio sostenuto instead of an Allegro) – it is not even in any sonata form with which we are familiar.

Admittedly, there are two minimally contrasting themes, the first one mostly unaltered throughout the movement – even though is shows some variety later – the second one more malleable, „away“ and somehow contrasting the first, but in tonality as well as in overall atmosphere there is not as much difference as we might expect from the first movement in a piano sonata, a symphony or a string quartet. What the first movement appears can be compared probably – if we are forced to give a category – to something like a fantasia without appearing improvised (albeit, his talent for it comes handy), or a prelude we know from Bach. We are introduced, but we are not proposed as to what comes later.

We are presented two topics here. The first topic consisting of mournful base and a lamenting ostinato in triplet, the second one is a “dotted” funeral-march-like “hymn” (1). We might feel in familiar waters. However, there is no masculine vs. feminine contrast here, as it has often been the case, in particular in some of Mozart’s sonatas. The movement appears genderless. Both topics stay in C-sharp minor and both stick to the same heavy and menacing atmosphere. Beethoven demands it to be played without dampers, further diminishings the contrast: “the harmonies mingle like in water” (2). The most salient distinguishing feature from the sonata form is that we are not going anywhere. We never leave home, we never leave the exposition. There is no development. Hence, we also do not return home in a recapitulation. The movement eschews the sonata form – not only by being extremely slow.

It does not even provide a „home“ as might be expected from an exposition. The atmosphere is, before anything else, menacing – not a pleasant atmosphere you consider home. We experience a contrast between the mournful triplet, which is the ever mournful background, and the lamenting theme, undulating around that mournful background. It never breaks free – it rather delivers associations emanating from a fixed vantage point, which appears as ghostly voices getting to us through the fog.

If we ascribe a trait to the first movement, with its heavy C-sharp minor, it appears as a fist-swinging, a curbed exposition of power, like a tiger in a cage. The coda, returning to the base, gives the impression of that strength caving in, after having been struggling stationary, sinking in to itself. Nothing has been accomplished. The coda means death. It does not becomes clear whether the preceding associations were just memories of a past live or feverish fantasies. What remains is silence and a huge question mark.

What a surprise and contrast. Abruptly, we appear out of the “abyss” (3), in life again, and we don’t even know how we’ve got here. Still, we feel a connection to the preceding situation: the key is D-flat major, the parallel enharmonic to the C-sharp minor of the first movement. It is a light-hearted Scherzo in allegretto, but it stays in piano just like the adagio movement. Hence, we do not leap fully into live, but, at least we feel that inner strength by means of interspersed subito sforzandos and forte-pianos.

A scherzo in the middle is familiar to us, so usually we would not expect anything signficantly different here, Yet, with the first movement having been slow, dreamy and fixated, we are not prepared to what is to be expected in the next movement. Hence, it is still a surprise, considering anything could have happened. The most probable thing we expect after the very long exposition – which essentially is the first movement – is a development section a sonata form owes us, a journey taking us away with familiar themes in the knapsack – but it doesn’t. The second movement rips us away, it relocates us out of left field someplace else, without any experience of a journey. A question mark remains. That way, Beethoven keeps us in suspense – at a point, at which usually we have the feeling the main plot is already in the rear mirror.

At this point, we would expect to have the typical sonatas journey ‘home-away-home’ behind us. Yet, we haven not been away in the first place! Furthermore, what has happened during that miraculous leap from the mortal first movement to the very alive scherzo – we don’t know. Hence, we expect an explanation after the scherzo, a big question remains unanswered, We want to know the whole story.

We approach the last movement with great expectations, hoping for a redemption.

Beethoven makes up for everything he has withheld from us so far, and even more. We not only have our fast movement, we also have our sonata form, but – almost as a shock – an “inferno”-like piece   (4) in presto-agitato. Structurally, it is the sonata form we are familiar with: an exposition of two contrasting themes, repeated once, the main theme in the tonic C-sharp minor, the side theme in the dominant key G-sharp minor, a journey in the development with frequent key changes, finding the home key from the dominant when returning home in the recapitulation, concluded with a coda. The coda is tradtionally short; Beethoven’s appears to have left his aberration to extreme long and distant coda like in his sonata E-flat major from 1796/97 (annotation: Opus 7) behind him.

Nevertheless, do not expect a Haydn-, Mozart-, not even Early-Beethoven-trajectory here. It keeps the form, but not the path.

The movement opens with a menacing theme in the exposition, reminiscent of the main theme from the first movement. Admittedly, the second theme reminds us of a short motif in Mozart’s sonata in C major of 1775 with a subdued entertaining character, yet merely for the sake of some contrast. It does not chip away from the permanently agitated character of the entire movement. Emotionally, there is not much of a contrast.

In the development and terrifying in the finale, the so far suppressed energy is unleashed, the tiger is out of his cage. What is revolutionary about the piece: the last movement, the finale, becomes the highlight, the pinnacle of the dramatic endpoint of a trajectory, known so far as leading us down from an early pinnacle to a undramatic end. The finale of the last movement does not feel like a homecoming in a recapitulation. It is even more shaking and agitating. Beethoven already does something similiar in the coda of the E-flat major sonata, but that seems outside the sonata form. Here it is part of it.

Beethoven has turned the familiar trajectory upside-down, following a natural path of emotions rather than an artificial form, the course of suppression and explosion of personal rage. He pushes the boundaries of what we are able to experience as instrumental music, a little more away from prescribed structure towards individualistic expression, making it are more direct emotional and personal experience without the detour over form as intellect.