Applied concepts of Intercultural Communication in the context of corporate discourse 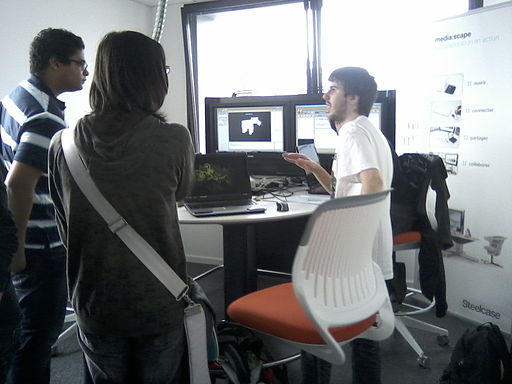 By Pierre Rudloff (Own work) [CC0], via Wikimedia Commons

How can Russian culture be taken into account in a corporate discourse context?

From the perspective of a Western European, having come into contact with Russian colleagues in an international technology context, I am going to single out three scales of the Cultural Orientation Model (COM) [1], on which I have seen significant cultural gaps between Russian and Western European preferences as explicated by the lectures and the readings of the MOOC Understanding Russians: Contexts of Intercultural Communication. The focus is on inclinations rather than norms, which makes these observation more subjective, as the Cultural Orientation Identificator also identifies inclinations rather than norms. Among each of these three dimensions, one scale is going to be singled out, and a way how to overcome them in the discourse community ‘workplace’ is proposed.

1. A substantial cultural gap pertains to the realm of Basic World Values, that is, to the Russian inclination of making a judgmental distinction [2] between “Us” (good) and “Them” (bad). This might constitute a substantial obstacle because it does not exist in such an overt manifestation in European culture, and can therefore be easily misconstrued. One would put this onto the COI scale ‘Collective/Individualistic’, because Russian collectivism in face of a dangerous outside world is the historical cause for this dichotomy. Furthermore, a self, centered in individualism, is much less inclined to see an outside group as dangerous. Hence, referring to ‘Schwartz Theory of Basic Values’ [3], one tends to put this dichotomy into the category of “Conversation”, somewhere located above the adjacent dimensions “Conformity” and “Security”. Security is achieved by in-group conformity. Hence, to overcome this special gap, one has to provide security by alternative means, or transcend the perceived threat emanating from the outside world.

At the workplace, it is not seldom reported that a group of Russian employees shows signs of segregation, sometimes even towards its most direct, non-Russian colleagues. This phenomenon is primarily accounted for by those Basic World Values of We-and-Them; non-Russian-speaking colleagues are perceived as a threat, and the in-group provides security. In order of overcome this cultural inclination of segregation, a corporation may consider developing an alternative sense of ‘We’, for example by repeatedly emphasizing the company’s character as ‘family”, that different ‘We’. Simultaneously, it has to be made palpable that cultural differences are embraced, by being culturally sensitive, i.e. by showing a basic understanding of cultural specifics in daily communication. Thusly, an alternative in-group is created, and a feeling of inadequacy because of one’s cultural peculiarities is avoided. One might argue that this approach be too obvious and has a pejorative connotation to it. Nevertheless, in the business context discourse, certain formulations have always had a pragmatic touch, that of doing business as frictionless as possible, and, therefore, are mutually accepted. Hence, interspersing language elements like “We are a family”, promoting corporation solidarity, wrapped in Solidarity Politeness (which is particularily embraced in Russian culture [4]) has already become good practice in many international companies.

2. At the workplace, cultural gaps in thinking style also matter. Taking a look at the difference between traditional Russian ‘past/present’ versus Western ‘future’ orientation [5], a difference in this scale becomes relevant in so far as orientation on the past and present bears consequences when it comes to cooperation; there is no such thing as a real agenda to determine future outcomes; things can go pear-shaped, and, with the Russian preference to utter what one thinks is true [6], but also not to be direct with superiors [7], an utterance like “Yes, we will do it” is not to be understood as a “Yes”, but as a “Maybe”. This is well-understood in the Russian high-context culture, but Western supervisors may misconstrue it as affirmation, and consequently run the risk of being disappointed, or even feeling deceived. Even though American culture knows the concept of ‘White Lies’ [8], it does not apply here, because neither is the purpose sparing the other person, but avoiding breaking negative news, and nor it is meant as a lie, but as a high-context utterance. Hence, overcoming this gap requires Western superiors to learn about the Russian high-context discourse. Enlightened about the background, they can reemphasize the importance of business demands, or attempt to lower the power distance (P-) by employing solidarity politeness, in order to invite employees to communicate more directly just as they would with colleagues. A misleading high-context ‘Yes’ would then transform into a low-context ‘Maybe’.

3. Russian tendency for particularistic thinking versus European universalistic view may lead, in the business context, to the notion that rules do not apply to everybody to the same extent. Consequently, this might lead to misunderstandings and conflicts. In Western European culture, universal equality before the law and the rules of public cohabitation are mutually accepted, and any deviation from it is widely frowned upon as nepotism. In contrast, Russian are more particularistic. The acute status consciousness of Russian business people , that is, status matters and ‘the boss is the boss’ [9] can be categorized as a manifestation of this characteristic. In contrast, in Anglo-European business discourse, a person-oriented enterprise culture [10], asupervisor is seen rather as a coordinator. A cultural gap arises when Russian employees resort to a deferential and indirect communication style, while, at the same time, the Western employees prefer the direct way. Overcoming this gap would again require diminishing the power distance (P-), and hence to some extent abolishing the special status the supervisor has as an authority figure towards ‘primus inter pares’, the first among equals.

In conclusion, the focus was set on pointing out cultural gaps in the sense of obstacles to overcome in a corporation discourse context. I am well aware that there are positive cultural differences between the Western Europeans and Russians on the COI scales, which could be harnessed for the good of a corporation culture, but those may be the subject of a different essay. Not least, in such instances as investigated, I would prefer putting the emphasis on taking a look at which problems and grievances are there to be improved and overcome, before attending to the positive that is to be promoted – the latter probably culturally independent.

[1] Understanding the Cultural Orientations Approach: An Overview of the Development and Updates to the COA by Joerg Schmitz, Page 8, Table 1: Final Continua and Dimension.

Lecturer Mira Bergelson: “[…] And one very important aspect for, that characterizes Russians and be seen, can be seen in various situations is to always distinguish us, which are good. Positive and them which are, so to say negatively assessed. Each culture will discriminate between in group and out group, but the amount of this discrimination or better, the strength of borders of the walls that exist. And constructed between us and them, these things really characterize culture. And then this aspect Russian culture, really. Puts sort of heavy, heavy walls and heavy borders between us and them. It can be seen both in the way people deal with strangers and with the familiars and intimates. […]”

j) tradition and security–preserving existing social arrangements that give certainty to life;

k) conformity and security–protection of order and har mony in relations;

Lecturer Mira Bergelson: “Russia, Russians show strong preferences, or better say, have a strong orientation toward past and present, probably not future.”

[6] Russian Cultural Scripts: The theory of cultural scripts and its applications; http://faculty.washington.edu/vaz2/Documents/AW_Russian_Cultural_Scripts_Wierzbicka.pdf, page 13

[…] Like pravda, truth, too, refers in its meaning to speech, but it is not as exclusively focussed on speech: the important thing is not so much to tell the truth as to know the truth. From a Russian point of view, people want people to tell pravda to others […]

“[…] when we talk about the situation with some social hierarchy because hierarchy is an important part of Russian culture […] So, here people would like to be indirect. For instance in the corporate discourse situations, Russians do not like to deliver bad news or provide negative feedback. […] They will therefore they will go to great length to avoid or at least delay this. […] sometimes it can even lead to situations where in a business context the Russian employee will say yes when they really me, mean maybe or no. […]”

[8] Russian Cultural Scripts: The theory of cultural scripts and its applications; http://faculty.washington.edu/vaz2/Documents/AW_Russian_Cultural_Scripts_Wierzbicka.pdf, page 5

[…]On the other hand, it is not regarded as acceptable to lie to another person under any circumstances (and there is no expression in Russian corresponding to the English “white lies”[…]

[…] The Russian side is acutely status conscious, which means that Russians don’t like if a person of certain status has to have negotiation with someone who is lower in status as he or she sees it, not the of course normally had because you find much more bosses, male bosses and female bosses in such negotiations. […]

[…] Some Russia enterprises succeed due to person-oriented organizational culture. Top professionals with high level of personal responsibility work in such organizations as a rule. Person-oriented organizational culture gives huge possibilities both for meeting ambitious needs and for realization of personal interests and initiative of employees. It is based upon the ability of employees to come to compromise and their independence from each other. As a rule activity of employees is not controlled but only co-coordinated by their supervisors […]