A plausible and defensible evidence of a new branch of life?

Critical free-thinking, constantly calling into question whatever prevalent truth a society holds, and the method of questioning a person’s knowledge until evoking in him „aporia,” a state in which he realizes that he actually knows nothing, are the key ingredients of probing alleged knowledge. Unless an eloquent Sophist is led beyond aporia, so that he must provide evidence, we are well-advised not to accept his so-called knowledge. Since we ourselves, using this method, are being considered a threat to a dogmatic society, the groundbreaking but shunned work of Woese and Fox, convincingly establishing a tripartite tree of life, piques our special interest. After all, we realize that if probed by us, they would not end up in aporia. Why is that?

First, Woese evokes aporia in himself. The evidence for the established dichotomy prokaryotes-eukaryotes appears too weak to him, not being based on evidence. This led him to challenge the model by transcending aporia, resorting to knowledge about ribosomal RNA, brought about by scientific method. Scientific inquiry reveals knowledge about what is unknown, returns to the object of research, and is hence the remedy for that state. By investigating the 16S rRNA molecule, present in every organism and a precise long-term clock, Woese harnesses facts rather than purported knowledge. Analogy reveals anomaly. Therefore, by finding RNA pieces in the genetic fingerprints in single-cell organism classified so far as prokaryotes, but absent in all others, a potential third domain emerges. Sophists may be content with this, but, unlike those, Woese and Fox provide evidence. Organisms with such similar genetic fingerprint are of the same unprecedented phenotype of ethane-producing anaerobes. Attempting to induce aporia by asking why these organisms constitute a new and distinct domain, they give a logical answer. In their genetic fingerprint, those organisms are equidistant from both the bacteria and the eukaryotes. Answering another probing question whether those organisms might have evolved from those established domains, they give logical evidence. Earth and life co-evolve, and their being well-equipped for the Archean epoch, those organisms existed along with prokaryotes and eukaryotes.

Should evolutionary relatedness be based on external visible features?

Not only these results let us rely on internal genetic composition rather than morphology when building a phylogeny. How can one judge from mere morphology if independently developed recipes can bring about striking similarities in a dish? Like such two soups  can have the same spiciness, distinctly evolved plants can possess the same number of stamens. How the former approach can be misleading is confirmed by Woese’ and Fox’ research: „The methanogens Woese and Fox had analyzed looked superficially like other bacteria, yet their RNA told a different story, sharing more in common with nucleus-containing eukaryotes than with other bacteria.“ We prefer to determine phylogeny by looking at the recipe, not by tasting the soup. 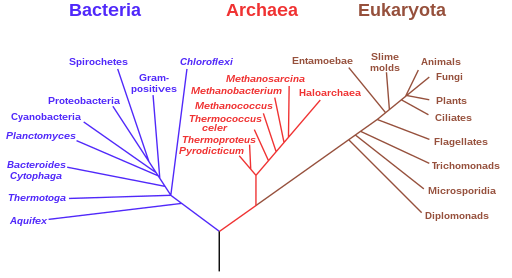 How come the results of Woese’s molecular phylogeny were slow to be accepted by the scientific community?

Trying to answer the question why Woese’ theory has been shunned for so long, we may draw a parallel. Like ourselves, Woese is seen as a cranky outsider, presenting an idea threatening an established belief and offending humankind: eukaryotes, to which homo sapiens belong, are no longer at the top of the evolutionary ladder. Instead, they are beging demoted to share a rung with microbes – small wonder some people were reluctant to embrace the new concept.

Unlike ourselves, Woese is reticent and reclusive in nature, shying away from public discussions which might have helped promoting his theory. After all, science needs to be communicated and discussed; instead, Woese signals being at a loss, being in aporia, by hiding in his office.

Furthermore, molecular phylogeny was not fully established. Genetic code could not easily be deciphered, hence the notion of the genome as the recipe for an organism was not ubiquitous. Only with growing computing power, once a genome was sequenced, Woese’s opponents could no longer dismiss genetics as evidential tool.

Only after the mainstream moves forward and comes to a point where scientific ideas ahead of their time become ubiquitously proven and widely embraced, it realizes and revives the ground-breaking importance of those contributions. Evidence wins when the majority of the scientific community is eventually able to recognize it by itself.